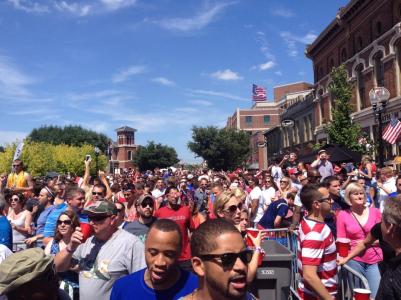 Of course this whole hot mess is President Obama’s fault.

2008 was the first time since Lyndon Johnson that a Democrat took Indiana. By running here, by showing up, by playing the ground game county by county, the President won this state comfortably in 2008. It was a beautiful thing.

The President chose not to run an Indiana campaign in 2012, perhaps to save money, perhaps because he had already the election won on the day Brother Romney prattled on about the Taker 47%, perhaps he wanted instead to coach his daughter’s basketball team. Had the President mobilized the troops, it would have mattered. Our State Director of Education Glenda Ritz got more votes than Mike Pence in 2012, as a proper fire-breathing liberal, and the Democrat John Gregg rallied late and didn’t lose by much. It wouldn’t have taken much to swing it the other direction.

For whatever reason the President did not campaign in our state, and so we got a Theological True Believer, the worst kind of leader: unrepentant, unwavering, unambiguous in his beliefs. He is the President Bush of Indiana, so dangerously sure in his beliefs that he has taken our state back decades.

Mike Pence won’t ever be President. But the damage is done. A national campaign to boycott our farms, our people, our products. It is an awful thing, with terrible implications for our future.

In college, my pal Darren and I on a road trip, driving through the great state of Montana and almost running out of gas. We hadn’t seen a gas station in many miles and so pulled off at the first business we could find, a saloon. No gas. We went inside, asking the locals for the nearest station, explaining our dire situation. “Go 20 miles that way.” they explained. And turned away, to young guys in trouble. Western hospitality. Look after yourself, Stranger.

Travelers in trouble in Indiana? In every town, helping hands and friendly faces. There is no place in Indiana that would turn a stranger away, gay, straight or out of gas.

Midwestern hospitality is no joke. Want to see it in action? Check out the annual Gen Con convention where the nerds and fanboys (girls) assemble in Indianapolis every year. Know why they like coming here? Because we are nice to them, welcoming and generous. We don’t judge. The dollars they bring are good to go and no one would think to be rude. Not every place is like this. In many cities the vibe isn’t welcoming. Strangers are looked upon as Strange.

I travel a lot and other places are different. Few things piss me off like men who catcall women, and I almost never see it in Indiana compared with other cities. That’s not us.

Know what happens to bakers who don’t make cakes for everyone? They go out of business. That’s what happens to bigoted bakers. Prejudice does not make for good customer service. This is not obvious to anyone but a True Believer who poses for pictures with women in veils and men in robes.

The Final Four is in our state this week and this amazing event should be the story, our accessible friendly city, where everyone (including Kentucky fans) will feel welcome, safe, not judged. But that’s not the story. Instead, because of a small and powerful fringe group who’ve aligned themselves with our zealot Governor, here we are, talking about the loss of home grown technology companies and national headquarters, being the butt of jokes and the center of attention for all the wrong things.

But you don’t get to win, Mr. Governor, and you won’t. None of us want to live in your American Taliban, with veiled women and closed minds. Where did you even dig up this brunch of crazies for the photo op? For shame. 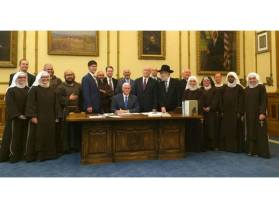 My state, my home, this beautiful place. Know why we are going to be okay? We have great beer. Lots of it. And more being made every month. The Hoosier National Forest is vast enough to have cougars, and possibly Bigfoot. You can see the Northern Lights and the Milky Way from our woods. There is baseball, one of America’s great orchestras, some of the best produce grown in the world, a world-class Concert Hall. Beautiful women. Friendly men. Good and decent leaders at all levels of government. The best damn (and friendliest) Gay Pride parade you’ve ever seen. Four Beard semi-finalists. The best hole in the wall Jazz Club in the World. And we make Subarus here. Seriously.

So we will overcome you and your God’s Truthers Mr. Governor. I promise. Small people didn’t make this place great. 50 years from now you will be an afterthought.

We will be okay. Good people always are.

If I could, I'd write about nothing but tacos. Alas, I am fundraising and leadership consultant in the arts, focusing on contributed revenue growth for organizations. Send me a compliment or complaint. And the location for the good tacos in your town.
View all posts by jeremymhatch →
This entry was posted in Indiana, Leadership, Life and Travels and tagged Boycott, Gay Rights, Indiana, Mike Pence, RFRA. Bookmark the permalink.

3 Responses to Indiana. A Defense.